Can Bread Go Mouldy In The Freezer? 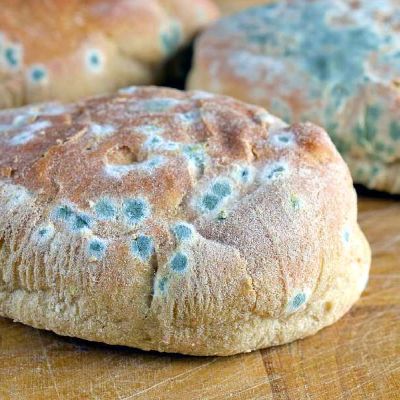 You just took a loaf of bread out of the freezer to discover it has mould on it? How did that happen? It was in the freezer, the bread should be safe from mould, so how can bread go mouldy in the freezer?

Bread is not a sterile food, it continues to change after it is baked. This is especially true if the packaging has already been opened. Most likely, a few mould spores were already present before the bread went into the freezer. Maybe there was mould in the packaging. How long the bread was in the freezer is a factor; how did you defrost it, and how much mould did you find?

So, yes, bread can go mouldy in the freezer. However, it’s more likely the mould spores were already present before freezing, or there was an issue with the freezer itself.

Why does bread turn mouldy?

Water is an ideal breeding ground for bacteria and fungus to multiply, which can include mould-type bacteria. This means that moist bread types have a higher likelihood of becoming mouldy quicker than dryer bread varieties.

Why does bread go mouldy in the freezer?

1- Mould was already present in the bread before freezing

Mould bacteria can appear in many different areas. As bread is baked at high temperatures, mould is unlikely to come from the bread itself. It can transfer to the bread through unhygienic handling or dirty storage and packaging.

2- Mould appears as the bread defrosts

If bread is re-frozen its chances of becoming mouldy multiply!

Should I store bread in the freezer?

Freezing bread is a great way to preserve bread for an extended period of time, but it will not prevent the mould from growing. You can delay the mould growth on your bread by choosing a drier bread or one with preservatives, but that really doesn’t solve the issue. And who wants preservatives?

Does all bread turn mouldy?

Bread choice is one answer. Did you know that sourdough bread is basically mould resistant? It’s true thanks to its acidy and the presence of lactic acid bacteria; sourdough will not succumb to mould spores unless left for a very long time! However, sourdough can still go stale.

The acidity levels of the bread have a contributing factor in slowing down the spread of mould. Bread that has been fermented for longer will be more acidic and will keep fresh for longer. The acidic environment is not ideal for mould growth so its presence is unlikely.

One of the most effective ways to keep loaves of bread from becoming mouldy in the freezer is to store them properly in the first place.

How to properly store your bread

It is easier to properly store your bread to prevent it from going mouldy in the freezer if you are dealing with homemade bread. After all, you don’t have much control over how store-bought loaves of bread are processed and packaged.

Different types of bread require different techniques to prevent them from becoming mouldy or stale.

You have other options besides the freezer to properly store your bread to keep it from going mouldy.

You have learned that bread can go mouldy in the freezer. But in most cases, it was already present before the bread ever made it to the freezer. Or you may have an issue with the freezer itself, and it is not holding the proper temperature.

The best thing to do to prevent the bread from going mouldy is proper storage. If you know your bread will last longer than a few days, put it in the freezer. You can put a whole loaf in or slices. Either way, you can just pull out what you need, thaw it, heat it up and enjoy it!