What Is The Best Bread For Stuffing? 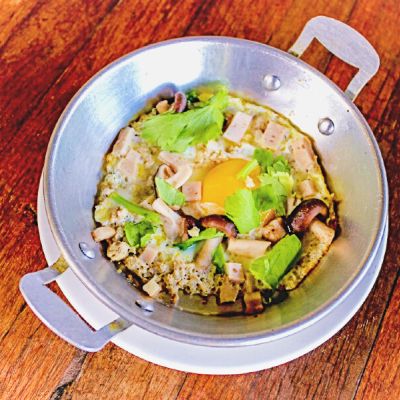 Do you love stuffing as much as I do? Well, if so, you’ll know that the choice of bread is a super important part of the dish. So what is the best bread for stuffing your Thanksgiving Turkey? Let’s explore what kind of bread is the best for stuffing and whether any bread you already have is going to make a decent stuffing for your roast.

The best stuffing is made from bread that’s lightly flavoured. White sandwich bread, brioche or challah are popular choices as their slightly sweet flavour complements the juices of the meat it absorbs to make delicious stuffing.

What makes bread the best for stuffing

Do you love stuffing? If so, then bread with a soft and fluffy light texture allows it to absorb the juices that you’re going to combine it with. Whether it’s sausagemeat, butter, onion, celery or broth (if making a classic stuffing) bread that absorbs the most flavour is going to taste the best!

Not all bread is soft and fluffy though, popular bread such as sourdough, french baguettes and ciabatta have open crumbs and are not suitable for making decent stuffing. Yes, it is possible to make stuffing with open crumbed bread but I find I have to add so much bread to absorb the juice that the stuffing just tastes like dry bread. The secret of good stuffing is to make it nice and moist!

Bread with a tight crumb and small holes makes the best stuffing. A dry crumb that soaks up all the lovely juices from the cooking is the best bread for stuffing. It’ll be packed full of flavour from the meat! Big open holed bread doesn’t hold the liquid very well.

The best bread for stuffing

Here are the top three popular loaves of bread for stuffing

White sandwich bread has been around for centuries because of its versatility in recipes and its ability to hold up under moist ingredients like eggs, vegetables, or meat. So don’t be afraid to try something new this Thanksgiving – make your favourite dish even better by using white sandwich bread as the base!

White sandwich bread is easily accessible and cost-effective. It has a perfect neutral flavour, a tight crumb and dries easily.

Similar to white sandwich bread, challah makes an excellent choice for stuffing. The added eggs give it a tight crumb and its fluffy texture makes it fantastic at absorbing juices. The egginess produces a pudding-like taste which can be a little too rich for some palettes.

Brioche is the perfect bread for stuffing because it’s soft, moist and flavourful. It also has a high egg content which helps create that perfect texture. And with its buttery flavour, you may never want to go back to regular old white sandwich bread again! It’s great for French toast too!

The extra flavour brioche introduces to the stuffing can sometimes be unwanted, and in some cases destroy what should have been a perfect celebration dinner. This is why white sandwich bread is the best all-rounder and takes the number one spot.

Preparing the best bread for stuffing

Once you’ve selected the perfect bread, now let’s cover how to prepare it for your stuffing recipe. Bread should be dry to make stuffing. Fresh bread cannot absorb much moisture so dry bread must be used. You ideally want the bread to be really dry! There are two ways to do this, either by using stale bread or drying some fresh bread in the oven.

Bread that’s a couple of days old can be used to make bread. For super soft or supermarket sliced bread it’s best to cube it and leave it uncovered for at least 12 hours. Drying your bread overnight or the morning before you cook will make the best bread for stuffing.

If you’re in a rush to make your stuffing you can dry the bread in the oven. To do this, cut the bread into cubes and place them on an oven tray. Bake for 60–90 minutes at 90C (195F), checking regularly to turn and make sure the cubes don’t brown.

Can I use wholemeal bread to make stuffing?
Wholemeal bread or continental bread such as german rye or pumpernickel are best avoided for stuffing. Their overpowering flavour is too strong for most stuffings and although can be pulled off by trained chefs isn’t suitable for a standard thanksgiving or Sunday roast.
Will flavoured bread work for stuffing?
Using flavoured bread such as onion, mixed peppers or even focaccia can make a fantastic stuffing. Balancing the flavour of the bread with the other stuffing ingredients can be a bit of a challenge however so is best left to experienced cooks.
Should I cut off the crust for stuffing?
It is a personal choice whether you remove the crust. Removing it creates a white crust that has a slightly lighter flavour. Keeping the crust on will taste more wholesome and have a more rustic texture. Crusts that are extremely hard can make the stuffing taste dull and powdery. If this is the case, you might want to include only a small amount of crust and dispose of the rest!