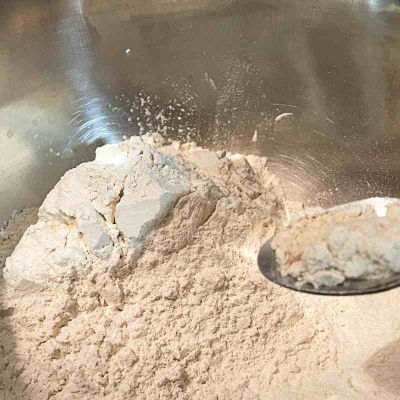 You may have heard of vital wheat gluten and wondered what it is and whether you need it or not. This article covers what vital wheat gluten does and if you should be using it to make bread. The answer, in short, is perhaps but not necessarily, let, me explain!

What is vital wheat gluten?

Vital wheat gluten, or “gluten powder” is made by extracting the gluten in wheat flour to produce an almost pure gluten flour. It’s used in bread making to increase the ratio of gluten in the flour, as a binding ingredient in cooking or to make a healthy vegan protein food called seitan.

Why is gluten essential for making bread?

In bread dough, gluten strands form a network that’s able to hold the shape and trap the gas that’s created by the yeast. If flour with a low protein ratio is used to make bread the dough can collapse or spread out during the proofing stage. Adding vital wheat gluten to flour improves its capacity to stretch and rise during proofing, increases the rise in the oven and makes the texture of bread more crunchy.

Are gluten and protein in flour the same?

Gluten is a protein that is found in bread flour which is responsible for forming the structure of the dough. There are other types of protein in flour, however, two gluten proteins, gliadin and glutenin are the most prevailing. It’s not easy to differentiate gluten proteins from other proteins in flour, therefore high-protein flour is accepted to be high in gluten, although the actual quantity and quality of the gluten are not displayed in the flour’s description, so taking the protein percentage of the flour as the key display of the quality of the flour is misleading, but good enough in most cases.

How to use vital wheat gluten in baking?

Bread flour contains around 11-15% protein, if your flour is below this you can use vital wheat gluten to make it more suitable for bread making. To do this, switch 1 gram per 100 of flour for vital wheat gluten to increase the amount of protein in the flour by 1%. Exchange 2 grams per 100, to increase the total amount of protein in your flour by 2% and so on.

Some whole grain flours such as rye and spelt contain little gluten or different types of protein. Whole wheat flour often contains protein of 14-16%, which is high, however, the proteins are less accessible making it harder to make bread. It’s therefore accepted that vital wheat gluten can be used to enhance whole grain and whole wheat flour to provide a better dough structure.

Dough improver mixes are commonly added to dough ingredients to enhance the properties of the dough. vital wheat gluten is often found in dough improver or dough conditioner mixes and is especially popular in those designed for whole-grain bread.

How is vital wheat gluten made?

To produce vital wheat gluten, water is added to wheat flour and kneaded into a dough. Once the gluten is hydrated and active the starch is washed away. After this, the water is removed and the remains are dried and blended into gluten powder.

Where can you buy vital wheat gluten?

vital wheat gluten can be found in supermarkets in countries where seitan is frequently eaten. It’s also found in the baking aisle, alongside the flour in larger stores. The most accessible place to find it is online, or in specialist baking ingredient stores. You can see the vital wheat gluten I use here.

As it’s thoroughly dried, vital wheat gluten contains little water to develop mould so lasts up to 10 years before going off. Once a packet is opened it should be used within 6 months, but often remains fresh for longer. Storing it in the freezer will preserve it for longer.

Is vital wheat gluten the same as seitan?

Seitan is a high-protein plant-based food used in vegan and oriental cuisines. vital wheat gluten is used to make seitan by whisking it with vegetable stock, onion powder, garlic powder, and salt. Leave to stand for 30 minutes and the mixture will feel like dough. Cut the dough into pieces and steam for 10 minutes. The seitan can be eaten as is or fried for extra texture and flavour. How To Add Flavour To Bread Dough