How To Make Bread Soft With These Simple Tricks 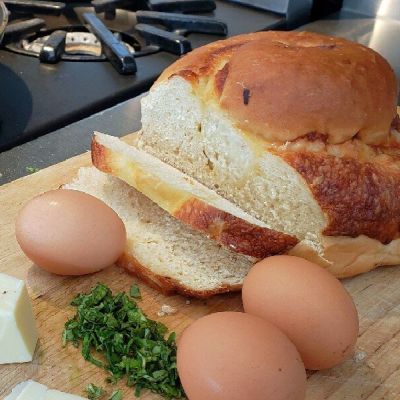 Bread is the stuff of life. It’s how we start our day in the morning, pack for lunch and dinner, and it’s the perfect complement to any meal. But at some point, you might find that your homemade bread isn’t as soft as you want it to be. Well, fear not! There are many methods we can use to make softer bread. Here are the basics of making your bread softer:

Soft bread with a moist, close-knit crumb has an amazingly tender texture. It is accomplished by retaining moisture in the crumb that would otherwise exit during cooling. We can also increase the moisture by using more water in the recipe or adding a tenderizing agent to make the gluten soft and fluffy!

How to soften any bread after it’s baked?

To soften bread after baking, place a tea towel over the bread or rolls whilst it cools. This helps to retain moisture in the crust to make it softer. Be careful! This method can create a soggy loaf if you don’t check on it! You might only want to cover it for a few minutes.

Strategies to produce a soft crumb

The towel method works well for bread that’s just come out of the oven, but I’d rather focus on the development of the dough to make my bread soft.

Softer bread can take many routes. To help make sense of all the options, I’ve created three strategies:

1 – How to soften artisan bread

If you are making sourdough or other long-fermented bread, you are cornered in what you can do to make the bread softer. These changes complement each other nicely to give a softer crumb in artisan bread:

To soften artisan bread, increase the water, add a small amount of olive oil and incorporate a touch of honey into the dough.

2 – How to use brioche techniques to soften bread

Brioche bread is one of the softest popular loaves of bread. Use the ingredients found in brioche to make a softer bread. This method needs the bread to be baked in a cool oven (180-200C / 250-395F). You might need to chill the dough before shaping it if it’s too soft and wet.

The basics of brioche include switching water for milk and using lots of egg, butter and sugar. This essentially packs the dough full of natural dough tenderizers, whilst the eggs provide extra protein, which improves the texture of the dough and its ability to retain water.

3 – How to soften a basic dough

To soften a standard lean tin loaf or roll, reduce the time it takes to make it.

Minimal slow mixing, followed by an intense, fast mix, no first rise and a warm final proof. It can contain a small amount of sugar and oil to make it extra soft. Here’s a great example of how to make a tin loaf with great oven spring.

This is the essence of modern sliced bread. To enhance its softness, add eggs, ascorbic acid or dough conditioners.

Some tweaks complement each other. Some won’t. This is why it’s best to follow one of the strategies above to ensure the bread comes off. But it’s handy to know how they work and when they don’t.

Increase the amount of water in the recipe

The most common response to making soft bread is to increase the hydration of the dough. A well-hydrated dough allows the gluten to extend properly and promotes a strong gluten network.

A moist crumb will feel softer to the mouth. This means increasing the dough hydration of a recipe makes a softer crumb. And this works for lean artisan loaves.

Too much water can weigh down the gluten structure to create an overly dense loaf.

A wetter crumb has a softer texture, but increasing the dough’s hydration also increases gluten extensibility which results in larger air pockets in the crumb. Great for certain types of bread, but bad if we want a crumb that’s compact and fluffy.

Putting this together, when we are making bread that has an open crumb, we should consider making it wetter for more softness. But if we are after a closely-knit crumb, it’s best to have a dryer dough, using fats for extra softness.

Add fat to lubricate the crumb

By introducing fat, such as butter, oil, lard or vegetable fat, we will get softer results. Fat lubricates and tenderises the gluten to keep it moist and less chewy. They reduce the browning temperature, which shortens the time it takes for the crust to form.

Fats also protect the outer perimeter of the bread during oven spring without the need for additional steam.

Swap 5% of the water’s weight for the fat of your choice and see how it changes the texture of your bread.

Add sugar to soften the crumb

Sugar provides many of the properties that soft bread endures. It’s a natural tenderizer, and, importantly, it reduces water activity.

With the addition of sugar, the bread will be softer and keep soft for longer. For quickly made bread, sugar is also helpful to provide some extra food for the yeast.

One of the simplest causes of overly dense bread is under proofing. Whilst a tighter crumb is achieved, the bread won’t be light and fluffy. The solution is to use the poke test to determine when the dough is ready to bake.

Reduce the baking time to increase the amount of moisture

The less time bread spends in the oven means less moisture will depart. It’s important to consider the baking time when producing any bread. Soft bread will bake faster than crusty bread.

In a typical bakery oven, crusty rolls take 20-23 minutes to bake. Soft rolls that are the same size/weight will take around 10. In a commercial bakery oven, the top heat setting increases for soft bread. This can be replicated at home by switching the broiler on and/or raising the shelf inside the oven.

Steam or not to steam?

Mastering how you add water to the oven to produce steam is a key skill in any baker’s toolbox. Steam aids the oven spring and also helps form beautiful crispy crusts. Bread with a delicious soft crumb can be made with or without the inclusion of steam, but a soft crust will only arrive if no steam is added.

For a soft crust you’d expect to find in soft rolls or batch bread, don’t add steam. In an oven without steam, the bread will brown faster. This reduces the baking time to trap more moisture in the bread.

Moisture departs the crumb when the bread bakes and as it cools. But if the outer perimeter is thick, water vapour struggles to escape the bread. Instead, the starch particles in the crust absorb the escaping moisture. This makes the crust dense and slows the rate at which water can leave the bread’s core. The result is a moister crumb with a thick yet, soft crust.

What about the oven spring if no steam is added?

There will still be an oven rise, regardless of steam or not. There will be less growth without steam, but you might not notice the difference! Using fat in the dough recipe will offer some protection to the crust in the oven to aid the oven spring.

A short fermentation is ideal for retaining moisture in the dough and achieving a tightly-knit crumb. Sadly, it means there will be less time for damaged gluten to repair.

Damaged protein is present in all flours. The combination of damaged and healthy protein will vary between brands.

Millers test the flour’s quality with a flour testing instrument to determine its Falling Number and other variables.

Unfortunately, these instruments are out of most home bakers’ price range!

For softer bread in a quickly made loaf, the flour choice is important. Use high-protein flour from a reliable source to produce a closely-knit gluten structure.

For quickly-made bread, the development time of the dough should be fast. Quickly made bread that’s intensely kneaded, followed by a short (or zero-time) first rise will make softer bread. They require little lubrication or extra ingredients, making them cheap to produce.

The close-knit crumb of these doughs is dense yet, subtly fluffy.

If you’re concerned about losing flavour or the benefits of organic acid development, you’ll have to make a trade-off.

However, a lightly flavoured loaf or roll with a golden orange crust is still delicious and visually appealing. With a longer-proofed artisan-style bread, extending the fermentation time will hydrate the gluten and make softer bread.

Use malt flour to enhance the loaf

Bakers often compensate by adding fats, sweeteners or dough enhancers. Adding a small amount of malt flour speeds up the production of the degeneration of starch. The sugars produced feed the yeast, so less yeast can be used. It produces a sweeter flavour and allies the sugars to tenderize the dough.

Adding malt flour reduces the proofing time, which can be detrimental for long-proofed artisan bread.

Include eggs in the bread dough

Eggs are high in fat and protein, making them a trademark addition to many famous soft breads. Pain de mie, brioche, and Vienna rolls are common examples.

Using egg enhances the protein of the flour, alongside softening the texture of the bread. They also impart a rich, distinctive flavour.

Due to the rise in dairy allergies and the popularity of veganism in recent years, it is becoming more common for commercially prepared bread to contain egg replacements such as soy lecithin, whey, or xanthan gum.

Replace some of the water in a basic bread recipe with an egg, and watch your bread become nice and fluffy!

You know how they say the devil is in the details? Well, if you’re a baker, it’s also hiding out there in the flour! From brands to types, each has its own properties that can make all the difference.

I’ve found flours that produce results that others cannot replicate. Sometimes switching the flour to a different brand is the difference between a soft, light crumb and a harsh, dense disaster!

How to store bread to keep it softer

To store bread, seal it in a bag before it cools completely (35C or 95F). You will find the bread stays soft for days!

As you can see, making bread less hard is a challenge and isn’t necessarily resolved by changing one method or simply adding an ingredient. A combination of changes and forward planning is required. Getting it right will make you a favourite in your household! I can testify on that one! Let me know how it goes in the comments.