Is White Bread Good For You (If It’s Artisan Made?) 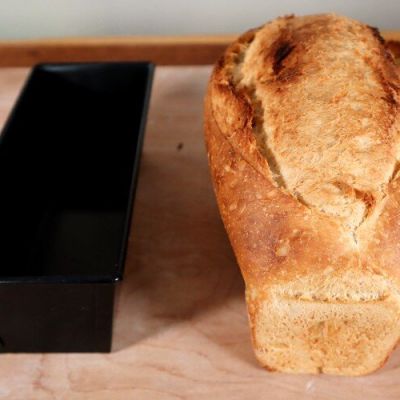 If you’ve ever been caught in the “healthy bread” debate, you’re probably wondering: which type of bread is healthier? White bread, whole wheat bread, or sourdough? We’re here to present to you all the scientific facts while also debunking all the myths.

It can never be refuted that bread has been a staple food around the world for thousands of years and continues to be. In the United States, it’s reported that around 200 million Americans consume at least one package of bread every week on average. If this statistic is anything to go by, then it means that bread is one of the most common meals in American households. But because Americans are becoming more and more health-conscious, it’s easy to see why the nutritional value of bread is a hotly-contested debate.

If you and your loved ones are consuming bread regularly or rarely, it’s of great importance to know whether or not it’s of nutritional value to you. But which type of bread is good for you? While there are many types of bread that are made in different ways, the most common ones are whole wheat bread, sourdough, and white bread.

Of course, some types of bread are more nutritious than others, so how can you make a healthy choice? In this definitive article, we’ll walk you through various aspects of bread that may make one type of bread more or less healthier than the other. More importantly, we’ll look at whether or not white bread is good for you.

Although bread is typically prepared from a dough made of flour and water, it’s made differently and can be available in many varieties. Let’s look at each type of bread at least to give you an idea of what we’ll be discussing later in the article.

Arguably the most popular type of bread, white bread is known for being portable, convenient, and tasty. It’s made from refined flour, which goes through an intensive milling process to remove the germ and the bran. The problem with refined flour is that it goes through this process, which removes the beneficial nutrients from white bread. In other words, the process of making refined flour removes the innermost and outermost layers of the grain. This means that fibre and about 25% of protein are removed from the flour, thereby leaving behind starch only, which is low in nutritional value.

With starch as the only remaining nutrient, your body will find it easy to digest white bread. And because starch or carbohydrates are quickly digested your body’s blood sugar level will most likely increase, thereby making you gain weight given that the excess sugar will be stored in your body as fats.

Sourdough is a traditional way of making bread using three ingredients: flour, salt, and a sourdough starter. Unlike these conventional types of bread, you don’t need milk, commercial yeast, eggs, oil, or sweeteners. Instead, you’ll only rely on the magical alchemy of a sourdough starter, which is essentially a fermented mix of flour and water with a heavy presence of yeast and bacteria. The fermentation occurs naturally and the yeast and bacteria will make the bread rise.

Although the process of making sourdough bread is long and labour-intensive, its main difference from other types of bread is that it contains lactic acid, which occurs through the fermentation process. This lactic acid plays a crucial role in neutralizing the levels of phytates by lowering the pH levels of the bread. As such, sourdough bread contains higher levels of nutrients and less phytic acid than other types of bread.

Again, this lactic acid is essential in increasing the bioavailability of the ingredients. This means that the nutrients from the bread are readily available for your body to use. In short, sourdough has better digestibility, increased nutritional value, and a low Glycemic Index (GI).

Here’s a quick look at the two common ways of making bread.

Although there’s no universally accepted definition of artisan bread, it has certain characteristics that distinguish it from other types of bread. Artisan bread uses simple ingredients such as flour, water, and salt and goes through a long traditional baking process.

In most cases, artisan bread will be hand-made and baked to perfection with no chemical additives that are often associated with manufactured bread. This gives it a superior taste, appearance, texture, and aroma to most mass-produced types of bread. You have to keep in mind that sourdough, white bread, and whole wheat bread can all be made using the artisan process.

Most mass-produced bread is made using what’s known as Chorleywood Bread Process. This process revolves around industrialized food production using large machines and chemicals to mass-produce lots of bread within a short period. Although this process is quick, it significantly compromises the quality and flavour of the bread. While this process can be used to make both white bread and whole wheat bread, it cannot be used to make sourdough.

To this point, there’s only one winner in the “artisan white bread (long-fermented) vs Chorleywood-made white bread” debate. Artisan bread goes through a thorough baking process that brings out a distinguishable flavour and texture that you’ll never experience with mass-produced Chorleywood-made bread.

So is white bread good for you?

That being said, let’s first take a look at some reasons why white bread is not good for you.

As we discussed earlier, white bread is made from refined flour, which is devoid of all other nutrients except starch. This is exactly what makes white bread a high-carb food. White bread has a GI of 75, which is among the highest given that the highest GI rating is 100. This is pure glucose and is a sure way of making your blood sugar levels rise!

Needless to say, a regular increase in blood sugar levels caused by the consumption of high-glycemic foods such as white bread can increase your chances of becoming obese, having heart disease, and having type 2 diabetes.

There’s no doubt that white bread is a high-carb food. Generally speaking, our bodies have a way of digesting carbohydrates a lot faster than other nutrients. When this occurs, your blood sugar level is likely to increase. But what happens to the excessive sugar in your body? Well, the excess sugar will be stored in your body as fats, which then makes you gain weight. See: best bread for weight loss.

Bad for Your Digestive System

The fact that white bread is made from refined flour means that most nutrients including fibres are removed from the flour. This means that its devoid of fibre, which is vital in keeping your digestive system functioning properly. In addition to helping you avoid constipation, fibres can lower the risk of colorectal cancer and other issues such as diverticulitis and haemorrhoids. Sadly, white bread doesn’t offer this very vital nutrient to your body.

Alternatively, here is why white bread might not be bad for you after all.

We’ve always been told that white bread has very unappealing side effects, but this isn’t entirely true. This is because white bread can be good for you if you have certain digestive issues such as ulcerative colitis, Crohn’s disease, and gastroparesis. Such issues are often aggravated by the consumption of high-fibre foods, so going for white bread in such situations makes sense.