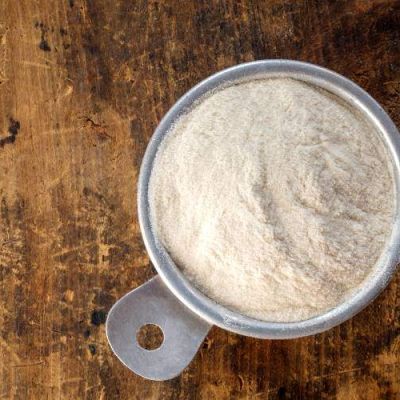 Xanthan gum is used in baking for its ability to hold and bind a mixture. If you are thinking of replacing baking powder with xanthan gum or looking for other alternatives, continue reading below.

No, you cannot replace baking powder with xanthan gum. The acidic component of the baking powder reacts in liquid. This produces carbon dioxide bubbles which cause your baked goods to rise. On the other hand, xanthan gum has no leavening properties and is used to bind mixtures together.

What is baking powder?

What can I use as a substitute for baking powder?

Baking soda is often mistaken as the same as baking powder. While they both contain sodium bicarbonate, baking soda doesn’t have the elements of cream of tartar. So in order to utilise it as a replacement, an acidic ingredient should be added. Here are some things that you can use:

Buttermilk is a fermented dairy product that has a sour and slightly tangy taste. Its acidic makeup means when mixed with the baking soda, it can replicate baking powder.

As this ingredient is a liquid, you might want to decrease some other liquids in your recipe. This will help you achieve the desired consistency that you need.

Plain yoghurt is similar to buttermilk in that it’s derived from the fermentation of milk. During that process, sugars break down and the concentration of lactic acid increases. As plain yoghurt contains a high acidic pH level, it also won’t add any flavour to your dough. This makes it a great baking powder substitute once it’s been mixed with baking soda.

Similar again to buttermilk, you may also want to decrease the amount of liquid in your recipe so it won’t offset the consistency.

Molasses is the by-product of sugarcane after being processed for its sweet juice. It’s a thick syrup with a very bitter taste. Since molasses also has an acidic pH level, it’s also going to cause a reaction once mixed with baking soda.

Aside from reducing the amount of liquid in your recipe, you should also take note of its sweetness and bitterness. This is best to use in recipes with strong flavours that can tame and hinder its bitterness.

Why is xanthan gum used in bread?

Bakers use xanthan gum in baking regularly to produce gluten-free baked goods. When it’s mixed with water, it turns into a thick mixture that copies the properties of gluten. It also locks in moisture to the dough which improves the texture, and at the same time holds the structure.

What replaces xanthan gum in baking?

One of the best attributes of xanthan gum is it’s a thickener with the ability to bind things together. But since most home bakers don’t have this available to them, there are a couple of substitutes that you can use:

Just like xanthan gum, chia seeds are also high in fibre and contain similar nutrients. Once chia seeds are soaked in water, they will form into a gel-like mixture that can help thicken and bind baked goods.

Using a 1:1 ratio of xanthan gum to chia seeds should work well for replacing it. Just stir it in hot water that’s double the amount of the seeds, and wait for your mixture to become viscous.

Cornstarch possesses a similar texture to xanthan gum. It’s often used as a thickener for stews or food that has liquid. What makes it a great substitute is it’s also naturally gluten-free.

Egg whites are also good substitutes, as they naturally act as both leavening and binding agents. They are also a good fit for quick-bread and cakes since they produce light and fluffy textures. However, since they’re an animal product, they’re not vegan-friendly.

For the ratio: 1 egg whit can replace 1 tablespoon or 4.5 grams of xanthan gum.

This may not be as popular as the other ingredients, but it possesses functions close to xanthan gum. It’s a white powder that can act as a binder and thickener.

A 3:2 ratio of guar gum to xanthan gum should work well with your recipe.